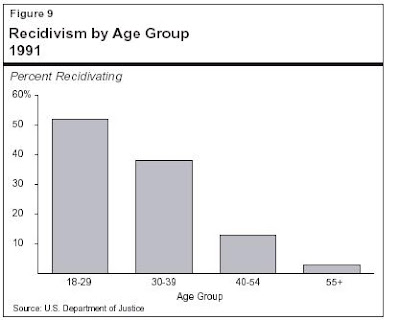 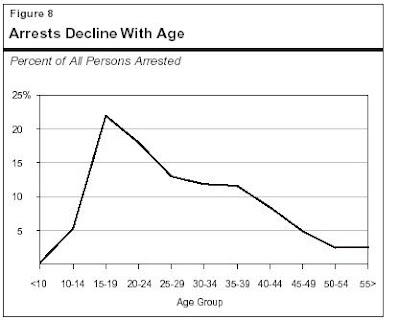 Criminal Behavior Declines With Age. Criminologists have long known that the propensity to commit crimes declines with age regardless of sex, race, ethnicity, or offense. Figure 8 shows that nationwide, arrests in 1999 peaked between the ages of 15 to 25, dropped dramatically for offenders 25 to 40, and were fewer than 5 percent among individuals 50 years of age and older. If reducing crime is the goal, the data suggest that imprisoning a 55-year old will have much less of an effect than imprisoning a 20-year old.
Perhaps the most important consideration related to early release of an elderly inmate is the possibility that he or she will commit additional crimes in the future. According to one federal study, 45 percent of inmates released from prison between the ages of 18 and 49 were likely to commit another crime and end up back in prison. By comparison, only 3.2 percent of those released over the age of 55 got in trouble with the law. In addition, a 1995 U.S. Department of Justice study tracked a cohort of parolees released in 1991. As Figure 9 shows, the study found that recidivism varies sharply by age group. In particular, this study indicated that older parolees are reincarcerated very infrequently, as only 1.4 percent of parolees 55 years and older recidivated.

“elderly “at age 55 –• Research points to a trend of "accelerated aging" in prison, i.e. that a prisoner's physiological age is, on average, seven to 10 years older than his or her chronological age. Research suggests this difference may relate to the stress of incarceration, history of substance abuse, and lack of access to health services prior to incarceration. (Journal of the American Medical Association, Aging Prisoners Stressing Health Care System, July 2004.)

State studies show an exponential increase in the population of older prisoners that is being seen nationwide. For example, recently Oklahoma completed its budget and population projections. It found that 16 percent of new offenders were over 45 years old – more than double the rate in 1990. The state is now projecting that its population of prisoners older than 45 will increase 48 percent by 2018.
“It is important to keep in mind that these figures only represent chronological measurements of age. In reality, the number of physiologically older prisoners will be greater. Federal studies have shown that the average prisoner is seven years older physiologically than he or she is chronologically. Thus, a 45-year old prisoner will often show the physical deterioration and require the level of care of a person in his early to mid-fifties. This is due to histories of poor diet, drug and alcohol abuse, stressful prison life, and often poor medical care. Thus, a prison system must be concerned not just with chronologically older but also with the physiologically older prisoners in the system. It is the latter population that will allow the state to better track ballooning hidden costs in prison budget projections”-Jonathon Turley
at April 24, 2013