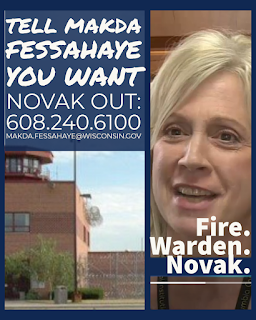 We have collected a number of new letters reporting on events and conditions at Columbia Correctional Institution (CCI). Incarcerated people continue to suffer and die under the authority of Warden Susan Novak.

The following incarcerated people wrote us about these events. They are fighting against despair and horrible circumstances. Please take a few minutes to write them a letter of support. Include their names and numbers on the envelope and letter inside.

Out of respect for the dead and his family we have removed the person's name from these excerpts.

"A white Muslim brother by the name of... died yesterday (1-15-20) from a head injury he obtained on 1-14-20. Brother... used a walker to get around and they should've had him on Unit-6 where there's a elevator on A-side for guys who need wheel chairs and walkers to get around. [Name] was a good brother and as a fellow Muslim it pains me deeply that he's no longer with us, that he perished in the belly of the beast. May he rest in peace."

"The other death that took place, was a white cat name... in his 40-s, he was in a wheel chair on the bottom floor, but was able to climb 2-flights of stairs in front of 30-inmates, and 3-cops and jump head first to his death.
You can not unsee death that happens before you.
If Secretary Kevin Clarr was more than a bootlicking, seat warming, uncle Tom, heads would have rolled already."

"One of my closest friends at CCI died last nite of a over dose of heroin no doubt, his drug of choice, for the last 40-years... He was from The Windy City... we had nothing in common, save our love for our people, and knowledge of the struggle for our people. I knew him for 5-years, we took several psychology courses together the last,was 26-weeks! Last year I have begged him to get clean. He just could not do it. A couple of years ago they strapped him down,did a cavity search and found dope,and charged him with introduction of narcotics.

He had 19-more years to do. The last time I saw him he looked so bad that I asked him :"so you've gave up trying to get that gorrila off your back"? He said: "when I give up you'll know it"...

Then we took that 26-week course, and I kind of came to understand the pain he was trying to numb... And this is so weird, but I wrote him yesterday and sent him some self-help info (His mom was a public school teacher for 43-years, in Chicago and she never gave up, she was always sending him stuff that he would mail, or give me if we were on the same unit). I told him I was hunger striking. I didn't have anything to say in there that may have saved his life, had he got it, perhaps because, I knew deep down inside how it would end. I just really feel for his mom right now her only son and favorite child."

"I am 1 of many being mistreated, disrespected and denied any programs/vocationals. The staff walk around here an literally YELL at us. I was recently fired from my unit job after a correctional officer yelled at me an I told him not to yell at me... because im not a kid nor am I a bitch, that was taken as disrespect, I was written up an fired from my job, but who was really disrespected in this situation? ME...

When I talked to the unit manager "Lindsey Walker" about the conduct report an me being yelled at an how I was the 1 that was disrespected an he shouldn't of yelled at me she replied by saying " with everything that has happened we where told to be more aggressive an demanding with you guys" tell me how that makes any sense??? So they where told to disrespect us???? An wonder why things are how they are in this institution.

Then I requested in my due process that they review the camera to prove the correctional officer that wrote me up falsified the report an stated many false things that I can prove where false with camera footage but they didnt review the camera an it resulted in me being found guilty on my ticket an fired from my job. He not only violated his work rules but he falsified government documents which is a federal law. Now what? It goes away because nobody will listen to us or come see for themselves an actually interact with us inmates.

In my 8 years of being locked up I never seen anything like this, its inhuman, its a cruel an unusual punishment, all we want is to better ourselves but we can't get any treatment. So we sit an rot in our cell an let these people treat us like we are scum beneath their dogs feet. I been through green bay correctional institution as well as Waupun correctional institution an this is way worse than them prisons an iv requested to be sent back to either. I'd rather deal with inmates stabbing an beating each other than deal with the way this place is ran."

"I have not eaten in a week, it started on the 13th. I am drinking water though, yet I have heard nothing from medical staff, for urine, blood, vitals, my weight.

Still I'm keeping them honest, and I report to the control station every meal, to make sure they document on my hunger strike log that I refused my meal. Only
this time a Sgt that doesn't work the unit wanted to know what I was saying to the 19 year old working the Bubble. She told her, then after she saw a opportunity to abuse her power and retaliate for going over her head. (I pulled rank on her about 6-months ago when she confiscated $15.00 worth of my personal canteen when I worked in the units kitchen. I made her call a supervisor, and he made her give it all back... I was making a celebratory birthday meal for my friends birthday).

So she comes to my cell and tell me she has to come in my cell and confiscate any food in my cell. I ignore this white rural woman, who just 2-years before, worked in a dinner for 30-years, seen an ad. in the paper which advertised employment in the DOC for $15.00 an hour. She came to the prison gates broke down, powerless her entire life...in her late 50s or early 60s, 4'11 and morbidly obese, at at least 300lbs... and in 6-months, they promote her to a Sgt! That's desperation.

Having the feeling of being powerless again, by me refusing to acknowledge her she begins to kick my door to provoke me. I don't take the bait, so she calls her supervisor, who she knows will side with her and he comes to my cell demanding: "why are you ignoring my officer!"

I reply:"a lot of your officers have been lying on me claiming I made threats or or disrespected them,so the safer course of action it seems not to say anything". He then tells me we can do it it the easy way,and let them search my cell for food,or get tasered and dragged off to the hole. I told him, I remember when you were a scared-to death-rookie and told him he had to do a lot more than threaten me with a plastic gun to scare me, cause I may have more bullet holes through me than I can count.

Needless to say, I allowed them to come in my cell and search. Once they were done and I returned to my cell I noticed a expensive pair of black leather gloves on my desk. Without thinking, I grabbed them and went to the officers station and returned them, he said: "you could've had a good pair of winter glove's", and I said to myself: then I wouldn't be a better man than you".

So just keeping y'all in the loop,I may not keep getting up walking down to flights of steps every meal, my energy is way down, and I can't afford to fall down the steps and risk breaking my neck."