The Project for Older Prisoners 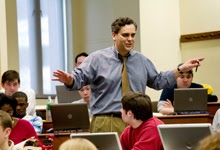 POPS
POPS, which originated at George Washington University, is committed to the reduction of prison overcrowding. The objective is to identify through background investigations older inmates who pose little or no risk of recidivism and help procure their early release.
Students volunteer as caseworkers and lobbyists. Caseworkers conduct thorough investigations into the prisoner's history by interviewing the prisoner, reviewing the prison records, searching past criminal and medical histories, and contacting crime victims.
Lobbyists research and help implement legislation in North Carolina that is consistent with the goals of POPS.
Through active participation, POPSs is instrumental in the reduction of prison overcrowding and in saving the taxpayers' money.

From Jonathon Turley piece POPS founder
THE PROJECT FOR OLDER PRISONERS
In 1989, I established POPS to work on the problems associated with the growing population of older offenders. POPS began with a single prisoner, Quenton Brown, who was incarcerated at the Angola Prison in Louisiana. On June 7, 1973, then 50 years old and homeless, Brown walked into a bread store in Louisiana and, at gunpoint, stole $100 and a 15-cent pie. He then crawled under a nearby house where he remained until the police arrived. After his arrest, Louisiana determined that Mr. Brown had an I.Q. of 51—the intelligence of a three-year-old child. After a one-day trial, Mr. Brown was given a 30-year sentence without chance of parole. He had served 16 years when I first met him.
In a matter of weeks, I was deluged by letters from close to one hundred older and geriatric prisoners, who heard I was representing an older prisoner for free. This number was striking in a state with such extreme overcrowding that it had to rent out cells in local jails for a significant percentage of its population. With the help of my students, POPS was born. We set out to develop new approaches to this population, including evaluative measures to isolate low-risk prisoners and policies to reduce the costs of this population while improving care for individual prisoners.
POPS works on both national and local aspects of this problem, and POPS continues to gather data on the special costs and necessities of this population. Hundreds of law students have been trained in POPS and are now practicing attorneys. All that is required is for a state to request such a program, give POPS researchers access to the prison population, and enlist the participation of one or more law schools. POPS/DC will help any law school establish an academic program and regional office for work in a given state. POPS largely performs three functions in this area: individual case evaluations, state reports and recommendations for reform, and legislative drafting.
POPS students work without compensation and the project does not charge for its services. When assigned a case, POPS students first interview prisoners over the age of 55. Each prisoner is then evaluated according to a long, comprehensive questionnaire that explores the prisoner’s criminal history, chemical dependence history, health, employment background, and family background. This information is generally taken from interviews with the inmate, review of the prison files, interviews with the correctional staff, and a search of all courts and news files available on LEXIS/NEXIS and Westlaw. POPS generally uses two different recidivism tests to gauge the risk of an individual inmate. If the inmate appears low risk on both tests, the student presents the case to the other POPS students.
If the students vote to go forward, the student then attempts to contact any victims or surviving family members as part of our victim consultation stage. POPS was one of the first organizations to make such interviews mandatory. Victim interviews can reveal inconsistencies in an inmate’s account or simply show a level of violence or aggression that does not appear in a written record. In states allowing conditional paroles, victims are asked what conditions would make them feel more comfortable with a release.
Assuming the inmate’s case is still viable, the case worker then proceeds to determine how a prisoner will live upon release. Specifically, the student confirms any benefits, such as veteran’s benefits or social security payments, which the inmate may be entitled to receive. If the prisoner has a supportive family offering long-term housing, the student confirms who owns the house, who lives in the house, and the space available for the prisoner. The student further confirms whether anyone in the house has a criminal record. Finally, if the prisoner is able to work, the student works with any family or friends to confirm employment upon release.
Once all of these facts have been ascertained, the case is presented a final time to the POPS members. If approved, the student then submits the comprehensive findings and recommendations to the appropriate parole or pardon board. The POPS model has been endorsed by leaders from both parties and state commissions in states like California.
http://www.law.gwu.edu/Academics/EL/clinics/Pages/POPS.aspx
The Project for Older Prisoners