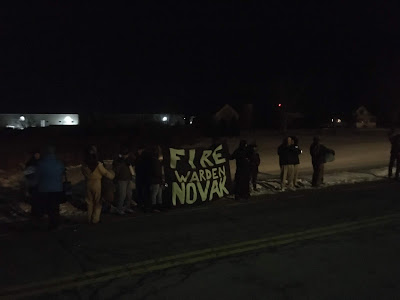 On New Year's Eve around 30 people gathered outside Columbia Correctional Institution for a noise demo in solidarity with the people who've been locked down since November 8 because Black prisoners beat up racist guards.

Demonstrators made a huge racket with pots and pans, drums, whistles, a conch shell, vuvuzelas, a megaphone and hand-held air-raid sirens. We held a large banner with glow-in-the-dark letters that read "Fire Warden Novak" and chanted the same. Also: "you are not forgotten / you are not alone / we are gonna fight / to bring you home!"

We were heard throughout the residences. People inside responded by shouting and banging on their windows. With the concrete walls and distance between the buildings and the fence it was hard to distinguish much of what was said, but at one point when local Portage police showed up to monitor the demonstration, someone inside the prison saw them and shouted "fuck the police!"

A few days later supporters received word from inside:

Oh new years day [people] was protesting in front of the CCI. I'm surprised it didn't make the news with all the racket they made, I could hear them from my cell and I'm on one of the furthest units from the parking lot.

Later on New Years Eve some people also set off hundreds of fireworks outside the Milwaukee Secure Detention Facility (MSDF) in solidarity with the campaign to close that facility. Video of that here, and here.

On Thursday January 9, protestors will follow up with a march on the WI DOC Headquarters in Madison. From the Facebook event:

"Warden Susan Novak has implemented fatal policies and enabled abusive behavior by racist guards... Larry Bracey’s death is on Novak’s hands. Allowing her to continue operating any WI prison is irresponsible and a great moral failing. Join us in demanding change!"


Conditions at Columbia Correctional have been horrific for months and Forum For Understanding Prisons (FFUP) has been working with multiple people within the facility to expose the racism, violence and retaliation since the lockdown started. Between October 22 and November 8 three racist, petty, loudly Trump-supporting guards got beat down in separate incidents by black men imprisoned at CCI.

But, here it is 3-fervent Donald Trump supporting cops get a lil touched up by some black inmates and we’ve been on lockdown for 2-months.
- from a letter by Damani Nantambu at CCI


In response, Warden Susan Novak and staff have engaged in a wide variety of retaliation, collective punishment and repression. On December 3rd, staff CCI killed Muhhamad (Larry) Bracey through medical neglect. Warden Novak is refusing to administer flu vaccinations, endangering many with compromised immune systems at this over-crowded prison. A man named ODell Miller went on hunger strike demanding that Warden Susan Novak be fired, and Columbia County Judge Todd Hepler authorized staff force feeding him for a year, sealing the record to cover his complicity in that torture.

Read more about the lockdown and these incidents here (chronological order):