Just Another Lynching by Damani Nantambu

Re:Ahmaud Arbery
While on the lamb on this case,I moved to Charlotte north Carolina (my sister is married to a white cat and they live in chapel Hill North Carolina, now,and has lived there for over 30+years). Shortly after moving there,my guy big O got his
Self in a pickle, by accepting the advances of a married women, if that wasn't bad enough, her husband was not a kingpin, but a drug lord from L.A ,and he kept
Telling me his minions were following him,including a NFL running back name
Broger Graves.(me and Broger,who played for the Eagle's would later become really close after we did time in Virginia and Atlanta)to take him out,for embarrassing the undisputed boss of the South. I didn't believe him,until we were
In his drive way,and I seen 4-cats,roll down the street
Read more »
at May 28, 2020 No comments:

Ways to pursue release in the face of COVID-19.

This is a mass email we sent to hundreds of incarcerated people last week to help them self-advocate for release in the face of COVID-19. We've been demanding such releases since mid-march, but the Governor's office has been incredibly callous and entirely unhelpful.

If you have an incarcerated loved one, or want to advocate for any particular individual's release, this email describes the means we've been able to find to attempt that. None of these methods have proven successful at all, let alone reliable.

Our hope is that many people pursuing them, and many more holding up the specific lives Governor Evers is unwilling to even consider releasing--including elderly people, immune compromised people, people who have mere months left on their sentence, or who have done years longer than their sentencing judges likely intended--we can compel Tony Evers to finally start caring, at all, about people who live different lives than him, or most of his staff.

Organizing Update May 21- by Ben Turk

How FFUP works: Peg is intake, Ben is outreach. We're both unpaid volunteers stretched beyond our capacity. We need your help to make the workflow manageable. If you need a response and individual help regarding conditions, health issues, abusive staff, etc contact Peg, by paper mail.
FFUP c/o Peg Swan 29631 Wild Rose Drive Blue River, WI 53518
If you want something posted and sent out to reporters, contact Ben by replying here. Indicate if you want your message published anonymously or with your name. I am going to focus on mass mailings, so if you ask questions, I likely will not give an individual response, but will include any info I can in the next mass mailing.

This week, I’m going to focus on releases due to COVID-19, but first: We've created a hotline for people with symptoms who aren't getting tested. If you or someone you know is in that situation, call 414-207-9691. A volunteer will ask a series of questions and pass your answers on. We've put funds on that #, so anyone can call.
I'll address Kerby (act355) lawsuits (which are on hold) raids and lockdowns, etc in the next mass mailing. The rest of this email is about three things you or your family can do to pursue emergency release:

Below is an email sent to Governor Evers' policy advisor, Katie Domina. Katie has told us that she is the go-to person in the Governor's administration for prison related issues, but every time we've gone to her, we get the kind of non-answers we've gotten about our clemency waiver requests.

Tony Evers is the governor of the state with some of the hottest incarceration hotspots in the world, as well as the greatest racial disparities, and some of the most restrictive and abusive criminal legal policies and practices. Wisconsin is a dramatic outlier, and the Governor needs to have a specialist in the role of addressing these problems. He must appoint someone to take a singular focus on the prison system, someone with expertise and direct experience.

Everyone touched by the Wisconsin's horrific prison system should demand nothing less.

We are aware that the governor created pardon / clemency criteria that exclude all currently incarcerated people. Those criteria are unacceptable, and the governor can change them with the stroke of a pen. What I want to know is what is happening with the clemency waiver requests that we've sent to his office. Do those requests ever touch his desk, or do you file or discard them because they do not fit his heartless criteria?

We have also published the requests, in two batches and have been holding biweekly online press conferences (on April 21, May 5, and May 19) where we share stories and testimony from the people who you all are disregarding as unworthy of even consideration for release. Journalists have been attending these events and writing about the governor's failure to take ethical action. See articles in The Journal Sentinel, Wisconsin State Journal, and The Wisconsin Examiner.

It has been obvious from the start of your administration that you all in the governors office do not care about criminalized people. Wisconsin has some of the highest incarceration rates and racial disparities in prisons nation-wide. National-level prisoner advocates, and people held on interstate transfers have told us that conditions in Wisconsin prisons are more restrictive, racist, and abusive than most states.
Read more »
at May 25, 2020 No comments:

First hand stories of COVID in WI prisons: April 16-May 13

A PDF version of this archive is available here:
https://drive.google.com/file/d/1vQbKYpRKGBqn0xzXiyC22obNPICGvvip/view?usp=sharing

Re: They don’t care, I mean really
I have to be careful how I word this, because I don’t want to get this person in trouble and lose a inside look at how these racist SOBs operate. But I learned this info this week. I can’t be more specific or they’ll review the cameras and determine where I went this week, and can clearly see me conversing with this high ranking person.
1) Since this Covid-19 thing broke out there has been 7 officers confirmed to have it at CCI. I say this because this person treated all 7 of them!
2) Once these 7 officers were confirmed to have it, they video sur these officers came in contact with for 14 days. Including: supervisors, nurses, teachers, doctors, cooks, food service workers, etc. But not inmates! Inmates they have come in contact with are never told; they have come in contact with infected staff. While the above staff are closely monitored, given a mask, and tested for the virus.
3) They also keep undercounting the number of staff who have been infected here. This must be exposed.
4) There are currently dozens of nurses, officers, and teachers wearing masks. 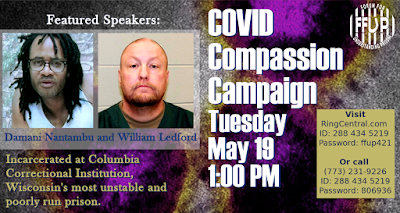 Our speakers will talk about how CCI's restrictive lockdown and security measures that function as collective punishment,
Read more »
at May 15, 2020 No comments: