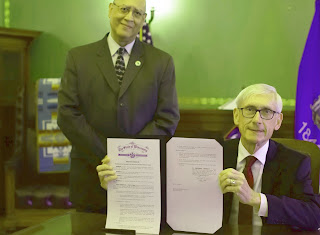 No prisoners will be eligible for pardon under Tony Evers’ new pardon advisory board guidelines. Governor Evers and Mandela Barnes made it seem like the parole board would bring long-awaited relief to incarcerated people. While revealing the order creating the board, they made statements and social media posts about Wisconsin's high incarceration rate and told the press “we believe in forgiveness and the power of redemtion” which made headlines across the state. Unfortunately, that forgiveness does not extend as far as it might seem.
You don’t have to look beyond the first page of Governors Evers’ newpardon application to see the betrayal. After a year of talking about dramatically reducing prison population and then months of back and forth between the governor’s transition team and the public; and after hundreds of prisoners submitted their heart-rending stories about indefinite delay of release, the new pardon application comes out with these fateful words:
“Eligibility: You are eligible for a pardon only if all of the following conditions apply to you:
1. You are seeking a pardon for a Wisconsin felony conviction.
2. You have completed your entire sentence at least five (5) years ago. This means you:
a. Completed all confinement; and
b. Completed supervised release (e.g., probation, parole, or extended supervision).”
website containing pardon application: https://evers.wi.gov/Pages/pardon-information.aspx
NO PRISONERS ARE ELLIGIBLE FOR PARDON.

So, who benefits here? Those who are past supervision (not “on paper”) already can vote. The pardon does not expunge the record, it does allow firearms but after five years out an ex prisoner gains little benefit from the pardon. Prison population will certainly not be reduced with this limitation.

WHY SHOULD YOU, THE PUBLIC CARE?

1) Wisconsin spends more on prisons than it does on the entire university system.

Hear about student loan debt? This is why-we support the prison industrial complex, not our schools. Back in the 70’s and 80’s, before prisons became big business, tuition at UWM was $200 a semester and everyone could go, and loans were numerous. There was mental health treatment for the poor and intact community support systems. We have been monetized and the poor are often funneled into our prisons to make 50 to70 thousand a year for those making up the prison system.

2) Good people would be released by a real pardon and clemency board, and a real parole system.

See wwww.secondchancewi.org for the stories of 200 plus prisoners begging for serious release consideration.
a) Old Law prisoners , about 2500. They all have been incarcerated since 1999, many have served over 20 years, some as much as 50 years. Many have multiple college and tech school degrees, garnered when there were plentiful Pell grants for prisoners, when Wisconsin believed in rehabilitation and renewal. Many have strong family support and are eager to give back to society. Other old law prisoners are sick and elderly, few are dangerous any longer. Under their original sentencing guidelines, ALL WERE ELLIGIBLE FOR RELEASE AFTER SERVING 25% of their sentences!
b) subgroups of Old Law prisoners include:
1) “Juvenile offenders”- a large group of prisoners who were waived into adult court as children and are now adults. Science has shown that the juvenile brain cannot judge adequately in rough situations. For this and other reasons, the US Supreme Court ruled in 2012 that life sentences without parole for juveniles is unconstitutional. As it stands, the lack of parole and pardons means that for many, their sentences will be life sentences.
2) Those slated to be deported upon release- Wisconsin is holding people beyond their parole eligibility who will not live here after release, they’ll be deported to their home countries. Many many want nothing more but to go home. Why hold them in our prisons?
3) Party to a crime (PTAC)- these are prisoners who were supporters of the crime, like getaway drivers and accomplices, often people who didn’t know what they were involved in. In these cases, the actual perpetrators often get released decades earlier because they had information to bargain with.
4) Those who are very old and sick- there’s no need to incarcerate people for their last days, why not let them be with their families?
See examples of our prisoners well ready for release here: www.secondchancewi.org
c) Those reincarcerated for non-felonies, or crimeless rules violations. Over 40 % of Wisconsin’s prison system admissions each year are for NON-FELONIES. Most are people on community supervision re-incarcerated for normal technical rule violations. Crimeless revocations are an exquisitely weak system that can go on forever, re-circulating people back into prison over and over again, on very weak grounds.

The public needs to take an interest and look at conditions within the prisons and communities affected by the system. If we do not question our government’s fiscal priorities, they will go on spending our money on unnecessary prisons, which harm communities.

3) Wisconsin has failed in its mission to rehabilitate prisoners and keep the public safe. Unless population is dramatically reduced, Wisconsin will continue to fail and the crises in our prisons will get worse.

Wisconsin prisons are so stuffed there is little or no treatment or training. Solitary is used for every problem and corruption on all levels reigns as the DOC (Department of Corrections or “corruption” as the prisoners say) tries to hide what is really going on from the public.

In addition, the Wisconsin DOC cannot keep its staff as guards and professionals quit in droves. The DOC says the solution is more pay, but we know there is no job satisfaction in these positions where the solution for everything is more punishment. We find that sadism often reigns and although there are caring and good staff in the system, they are overwhelmed by the bad actors. The present ethic is to see the prisoners as non-human, as “other.” Compassion and empathy are turned off in order to keep the job, get the pay check. The professional staff- mental and psychological health workers- are in especially short supply and cannot usually be bribed into staying with higher pay, because they went into these professions to help people, not watch them be tortured and abused. FFUP is in touch with two of these professional who quit because of conditions and corrupt and harmful policies dealing with the mentally ill.

The big irony is that while the parole-ready Old Law prisoner is denied release because he/she “has not served enough time for punishment” or “ poses a risk to society” Truth in Sentencing (TIS) prisoners, those who were imprisoned after 2000- have a release date by law and they are let out, ready or not. Many are released straight from months and years in solitary confinement and get little or no support before being put out. They can then be whisked back into the prison at the blink of an eyelash for a any non-felony rule violation the supervising agent can cook up. We acknowledge that some of these revocations are for good cause, but we have been on the advocacy side of far too many that are just plain arbitrary.

4) Wisconsin has the highest rate of Black incarceration in the country.

This means families struggling to thrive without fathers. It’s not a coincidence that, for many years, Milwaukee had the lowest school test scores in the country. Again, our policies decimate families and community structure within Black and Brown communities. Laws and policies get away with exploiting and targeting these communities because of Wisconsin’s deeply segregated cities. This gutting of communities fuels the kids likelihood to join gangs.

Taxpayer money needs to go to community building and schools not prisons. The only way to do that is to reduce prison population. We went from approximately 7000 prisoners in 1994 to approximately 22000 now. With money going into prison building and expanding guard pay or overtime, all the programs, training, treatment and rehabilitation has been slashed to keep the prisoners entombed. Why? MONEY. Your taxpayer dollars go through the DOC budget into the hands of corporations and others that feed on over-incarceration. At no other point in U.S. history—even when slavery was legal—has there been so many people held against their will. Think about that. This is what your tax money is paying for and you have a way to change it.

Write and call your governor and state congresspeople. Ask them to BRING BACK REAL PARDON, CLEMENCY, AND PAROLE!

Tell them we need to REDUCE THE PRISON POPULATION safely, so the WI DOC can again take up its mission to rehabilitate prisoners and keep the public safe.

Look up your state representative and senator at legis.wisconsin.gov

Mark your calendars for action days next month: