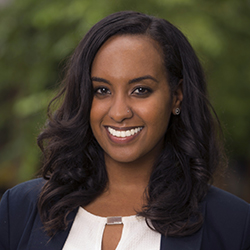 I have a number of questions I was hoping would get answered by calling the new hotline, but they directed me to send them to you in writing instead. I also asked you some of these things on the phone Monday. I hope you can clarify and be more forthright with this important information.
First, on Monday you said DOC was following DHS guidelines. The guidelines we found (at https://www.dhs.wisconsin.gov/dph/memos/communicable-diseases/2020-07.pdf) state that "Staff who have had close contact with patients with confirmed COVID-19 should be restricted from work." As I reported Monday, staff at Columbia CI admitted to having contact with confirmed COVID-19 people and said they were required to come to work. Are you denying that Nurse Jean and Sgt Cascaddan had contact with covid-infected people, or is there some other DHS guidance the DOC is following?

Second, on Monday you said that you're "doing fine" regarding HSU staff. What we're hearing from inside is that nursing staff turnover remains as high as ever, that many are stressed and working overtime hours. We have no confidence that the DOC is "doing fine" regarding medical staff in the face of this crisis. Public accountability requires you and Secretary Carr be more candid about your lack of capacity to adequately treat the people "in your care". By denying this problem, you're enabling the Governor's failure to address overcrowding and carrying the entire state toward a public health crisis when the virus incubates and concentrates in your facilities, then inevitably spreads back out.

Third, we continue to hear about very bad practices, failing to mitigate that spread. Here is just a sample.
What can we tell our incarcerated friends to do when they see or are required to do these things? Is there somewhere they can reliably report specific instances that will get the problem addressed quickly without retaliation?

Fifth, why is testing happening so infrequently? The DOC has been testing people at only almost half the rate that Wisconsin is testing people state-wide (see attached chart). Who determines how many tests the DOC gets? How do you decide who gets tested? Why are some of the facilities with the most exposure: MSDF, CCI, WCI receiving fewer tests than other facilities?
We're hearing that people who report symptoms or request tests are being put into quarantine that deprives them of access to tablets, phones, and other property. That amounts to punishing people for getting sick and is going to deter people from getting tested. We've heard that people who resisted quarantine after reporting symptoms were threatened (a taser held to their heads) and dragged to segregation. What are you doing to ensure safe and accurate testing? Will you ensure that people who request tests maintain contact with the outside world and possession of their property? 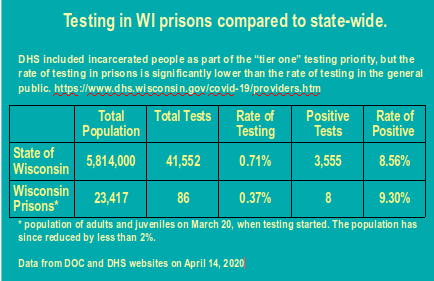 Sixth, I noticed some irregularities and concerning things on the DOC's testing dashboard. I've attached images of the dashboard posted on 4/10 and on 4/14, as well as a chart with just the information from facilities whose information changed between the two charts. It seems that either the information posting to the testing dashboard must have been inaccurate, or people were moved around. I hope you have an explanation.
Pending tests disappearing: CCI went from 6 total tests, 2 positive, 1 negative, and 3 pending to 3 total and 0 pending. What happened with those 3 pending tests? Total tests inexplicably went down at a number of facilities: DCI, FLCI, PDCCI, RCI, Robert Ellsworth CC, TCI, and WSPF.
New negatives when there was no pending test: Jackson CI went from 0 across the board on 4/10 to 1 negative test on 4/14. If there was a negative test, how did the results get back so much faster than the usual week or more pending period? More negative tests than were pending also appeared at GBCI, KMCI, MSDF, OSCI, and RGCI. 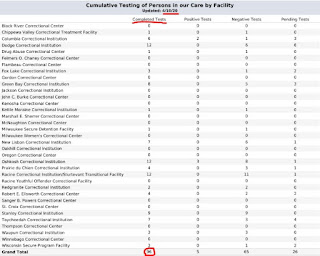 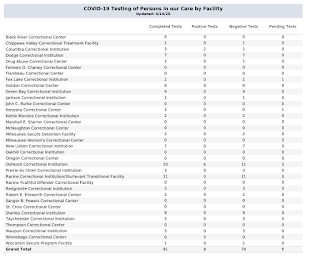 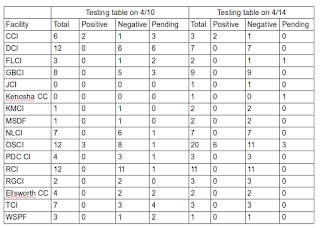 Seventh, the DOC's culture of abusive guards continues. We've heard of two instances of guards either intentionally putting people who've been sources of information in proximity to violent and unstable captives, or ignoring threats. We've also heard about guards saying or doing provocative things to increase the tension in this stressful time. At Taycheedah a sergeant told everyone in the unit "I hope all of you get sick so that the national guard will come in here and I can go home". At Waupun, a guard pranked everyone by continually restarting a movie 90 minutes in, so people watching it would never see the end. These are relatively petty things, but also serve no imaginable purpose other than to provoke anger or fear.
It's been months that you've been telling us that there will be improved oversight, but it continues to be the case that complaints are handled internally in facilities and incarcerated people have no confidence in that process.