Jeffery Polar: Coronavirus and people with cpap machines in GBCI 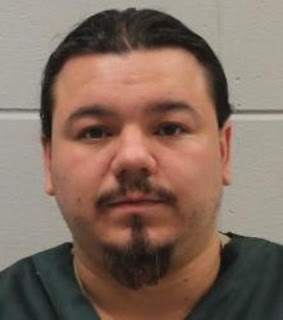 [UPDATE: they made a similar move in Waupun. Anonymous note to follow.

UPDATE 2: staff at GBCI are punishing people who use the machines by taking away rec time]

Subject: Coronavirus and people with cpap machines in GBCI

So Green Bay Corr. Inst. did a bunch of moving inmates around to make room for people who get sick and need to be quarantined.

Now here is what I don't understand. The second floor has three hallways. The middle hallway consists of dental, and medical. The left hallway is now the "sick" or "quarantine" hallway. The right hallway is where they are housing inmates with cpap machines.

They had a big meeting with all the inmates with cpap machines. They gave us the option of giving up our cpap machines or be moved to the treatment center's right hallway.

They told us that we are considered "high risk" to contract the virus due to our cpap machines so if we wanted to keep our machines we would have to relocate to the treatment center. A lot of inmates gave up their machines to avoid being on the same unit as the coronavirus quarantined inmates.

What I don't understand is if we are "high risk" why would the administration put us on the same floor as the people with coronavirus? This policy just doesn't make any sense. We are being forced to either suffer sleep apnea and possibily die in our sleep just to avoid being near coronavirus infected inmates or keep our machines and live within feet of infected inmates.

What kind of a choice is that? I would think you would house the "high risk" inmates as far away from quarantined inmates as possible.

Sorry this is so long of an email. Governor Evers really needs to act before it's too late. I'm here for a crimeless revocation of 8years and I chose to keep my cpap machine so I feel like I'm sitting on death row just waiting for this coronavirus to hit GBCI. Thank you for your time.

Yeah what about us crimeless revocation people? Are we to sit on death row because we broke a supervision rule? Some of us have already served many years for that rule violation and yet here we still sit! I haven't committed a crime in 16 years and yet I'm still a violent criminal in the public eyes. This system is so screwed up. I was watching the Simpsons TV show on Sunday March 29th and they had a scene showing different States and what they were known for and they had a picture of Wisconsin and on it said "The lock me up state"!!! This state is so screwed up that even the TV sitcoms make fun of us. I was shocked at first but agreed with em. Here they just lock us up and they don't care about our lives.


Today @ 1:17 P.M.  a nurse here @ Waupun Correctional Institution came to every cell hall and took everyone's C-Pap machine. I have server asthma and sleep apnea and my machine was taken. They say the reason is because c-pap machine can spread covid-19. How if I'm the only one who uses my machine? I have a single cell and we are on lockdown. We only leave our cells for 20-mins to shower on Monday, Tuesday, Wendsday, and Friday. Taking away our c-pap machines will not stop the spread of the covid-19 but it will put us who have sleep apnea at greater risk(especially since we have the tendency to stop breathing in our sleep). Something seriously needs to be done about this or they need to release all of us with sleep apnea.

So when we were moved to the treatment center wing, which is now converted to house cpap machine using inmates and segregation inmates on the step plan, we were told that we're still general population and would have the same privileges as the cell halls general population. For the past few weeks we were allowed to attend recreation as general population which includes phones, bean bags, playing cards with another inmate but only two at a table, and weights. This recreation is upstairs in the main building.

Now as of 4/14/20 according to a memo and staff we are no longer allowed to attend recreation like general population. We are now being treated as segregation step plan inmates. Our recreation is now constricted to cages outside the treatment center building. We are being punished for keeping our cpap machines. We no longer get to use the phones at recreation, throw bean bags, play cards with another inmate at a table, or use the weights.

Being able to use the phones at recreation is the only reason I attended recreation. When I asked why were being classified as step plan inmates and being denied recreation privileges the same as general population I was told "give up your cpap machine and move to the cell hall". This isn't fair but nothing is ever fair for us criminals, oh I forgot we are being labeled now as " persons in our care," yeah right we are still inmates in their eyes.

They keep trying to make it difficult for us with cpap machines and force us to voluntarily give them up. I can't speak for everybody but I need mine and use it everyday even if I only take a nap. I don't want to die in my sleep and I don't like being discriminated because I have to use it. I don't know my rights but it sure doesn't feel like I'm being treated fairly. I'm here for crimeless revocation and I'm scared I won't make it home. Thanks for listening.
at April 08, 2020